Interseeding cover crops into corn is a great way to take advantage of forage and soil health potential. A soil science professor and commercial research farm manager give a beginner’s lesson on an advanced management technique.

In traditional corn rotations, overwintering with a cover crop is an attractive option for producers wanting to make strategic improvements to field conditions or take advantage of forage potential for livestock.

While it is common practice for cover crops to be established post-cash crop harvest, this can become a challenge for several reasons, says Dr Ryan Haden, Associate Professor of Soil Science and Agronomy at The Ohio State University.

“Regions with a shorter growing season can pose a challenge for establishing many cover crops after fall harvest due to the colder climate which limits early growth potential before plants go dormant. But even in good conditions, a lot of areas are limited on what species can be successful when seeded after corn or soybean harvest,” says Dr Haden. “We also see challenges pop up in different areas of the country if harvest was delayed or fall weather patterns are wetter than normal.”

A practice increasing in popularity to overcome these challenges is to interseed cover crops into the cash crop early in the growing season before the canopy closes.

“Generally, the interseeded plants get started, put down good roots, then go dormant while the cash crop canopy shades them. Once the crop is harvested, they are ready to grow again,” says Jones.

Not only is getting a cover crop established before the cash crop is taken off giving more northern regions the ability to take advantage of increased biodiversity, but it’s also opening up options of species that more moderate climates can use.

“After corn, most regions are typically limited to cereal rye or wheat to get the crop established before cold weather sets in. Interseeding allows time to establish crops like clovers and radish that have huge soil and nutrient benefits but need more time to get going,” says Jones. “For farmers planning to graze cornstalks for winterfeed, interseeding is also a great way to provide cows with additional forage without having to haul in hay.”

When working with upper Midwest producers to take advantage of cover crops through interseeding, a common concern Dr Haden came across was the fear that the cash crop yield would be hurt due to competition for water or nutrients.

“When compared to the control field, none of the interseeded fields suffered any yield penalty (see chart).” says Dr Haden. “In the following season, growing conditions were improved, so we saw an increase in yield across all the fields – including the control. The fields interseeded with cover crops had a larger increase in comparison particularly in the case of legumes cover crops, which is most likely due to improved N fertility and organic matter from the first year’s cover crop.”

Through his work, Dr Haden has found interseeding to work best for fields yielding less than 200 bu per acre. In high yielding environments, it can be challenging to get an interseeded cover crop going with such a rapid growing corn crop.

Typically, interseeding is classified as using a high clearance drill like the one Dr Haden used in his study. According to him, any method of establishment be it aerial seeding, broadcasting or drilling, classifies as interseeding.

“Each of the methods has its pros and cons and will be a more suitable option for a business based on what equipment they already have, field conditions and what their local aerial seeding market is like,” he says.

When flying on cover crops, Dr Haden advises seeding rates to be increased by 25-30 percent.

“Depending on how expensive your seed is, this can still be an affordable option because it gets the job done so quickly. Teaming up with your neighbors to fly cover crops on when crops are flown on can often help reduce costs further,” says Dr Haden.

While aerial seeding can be a time saver and can allow producers the ability to take better advantage of timely rainfall, seed to soil contact is reduced compared to other methods which can make establishment less consistent.

Similarly, to aerial interseeding, broadcasting seed will need to have rates increased by 25-30 percent to make up in the reduced seed to soil contact.

For systems that cultivate deep furrows between corn, which is a common practice for organic growers, broadcasting is the best option available since drills will struggle with the unevenness.

“Broadcasting seed may not seem like an attractive option to some because you’re having to increase seeding rates, have the right equipment and spend time traveling across a field,” says Dr Haden. “But the big thing to remember here is that a broadcast seeder can be relatively affordable to buy or rent for those wanting to not rely on contracting a pilot.”

A high clearance interseeding drill is going to offer the best seed to soil contact which will help manage seed costs when special varieties are being used.

“Some interseeder drills are capable of applying glyphosate and side-dress fertilizer in the same pass as planting, which is an attractive option for those planning to make interseeding an integral part of their long-term management system,” says Dr Haden.

Getting the timing right

Since corn is such a competitive plant, getting the interseeding time right is more about ensuring the incoming cover crop still has access to light before the canopy closes than the growth potential of the already established corn.

In his work, Dr Haden has found interseeding to work best in corn when done during the V3 to V6 growth stages in conjunction with side dressing, allowing the cover crop to get established and growing before light access is closed off with the canopy. If a farm has missed that window, interseeding can be done later in the season once the corn plants have started to dry down and light is reaching the soil surface.

“The earlier you can get your cover crop in, the more you are going to be able to reap the benefits from it but getting it in later is better than not at all,” says Dr Haden.

According to Jones and Dr Haden, cover crops should be selected based on a field’s unique environmental challenges, specific goals a farm is trying to achieve and the subsequent cash crop.

“Think of cover crops as a well-stocked toolbox,” says Jones. “Each species and variety can serve a particular purpose working towards a particular goal when managed correctly.”

For erosion control and nutrient scavenging, grasses are a good option. To take advantage of nitrogen fixation benefits and biomass growth, Jones recommends a variety like FIXatioN Balansa Clover which can fix upwards of 200 pounds of nitrogen per acre. In Dr Haden’s trial (see chart), it produced in excess of 600 pounds of biomass per acre more than red clover and is low bloating for livestock.

While Dr Haden has found both cover crop mixes and monocultures to be successful, he advises producers to only use radish as a monoculture since it is so dominant.

“Radishes are shade tolerant and do a fantastic job at protecting soil and breaking up compaction, but they tend to be dominant. This makes them great at smothering weeds for a clean field come spring, but they will also smother out other cover crops if their seeding rate in a mixture is too high,” he says.

While herbicides used for the interseeding growing year need to be compatible with the chosen cover crops, producers also need to look at their previous herbicide programs to ensure there are no issues from products with long residual effects. This can prevent seed from germinating.

“Aside from carefully managing what products are being used, interseeding works well with side dress N application for corn. I’ve found you can plant your cover crop, apply nitrogen and spray post-emergent herbicide all in one go – saving a lot of time,” says Dr Haden.

Interseeding is not for beginners

Both Jones and Dr Haden stress that interseeding is not a management practice that should be attempted by novice cover croppers and should only be done by those with experience.

A good intermediate step, says Dr Haden, is to experiment with frost seeding red clover into winter wheat to get experience in managing two different crops at the same time.

If it is a practice that a farm is interested in trying, Jones says to learn as much as possible from other producers practicing it before doing test plots.

“Interseeding is not for the faint of heart. Getting your timing right and the selection of the right species and varieties can make or break it for you,” he says. “Learn as much as you can from others and take it slow. The benefits can be monumental to an operation, but things must be managed right first.” 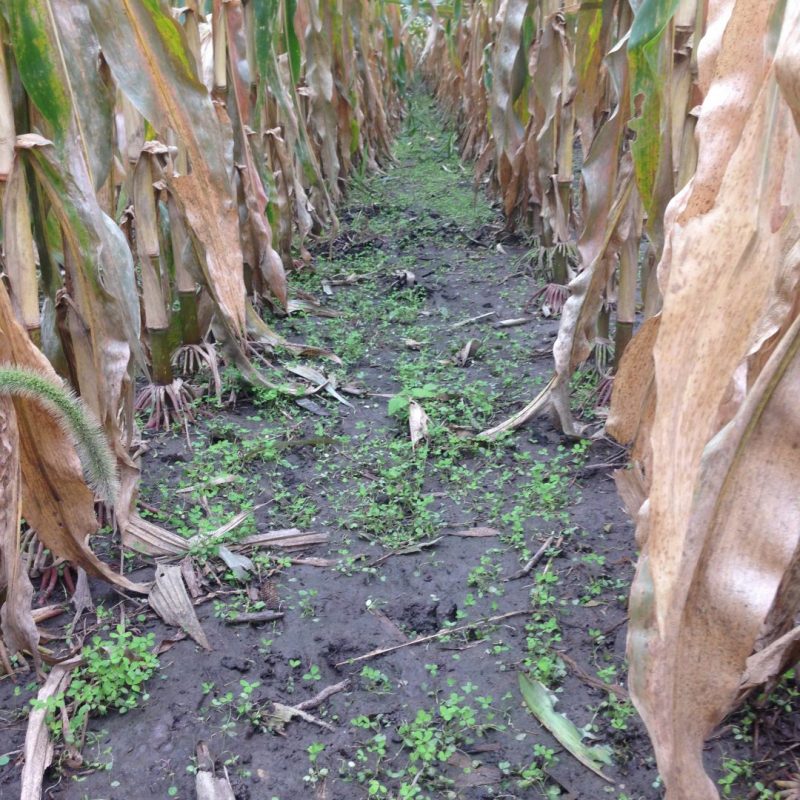 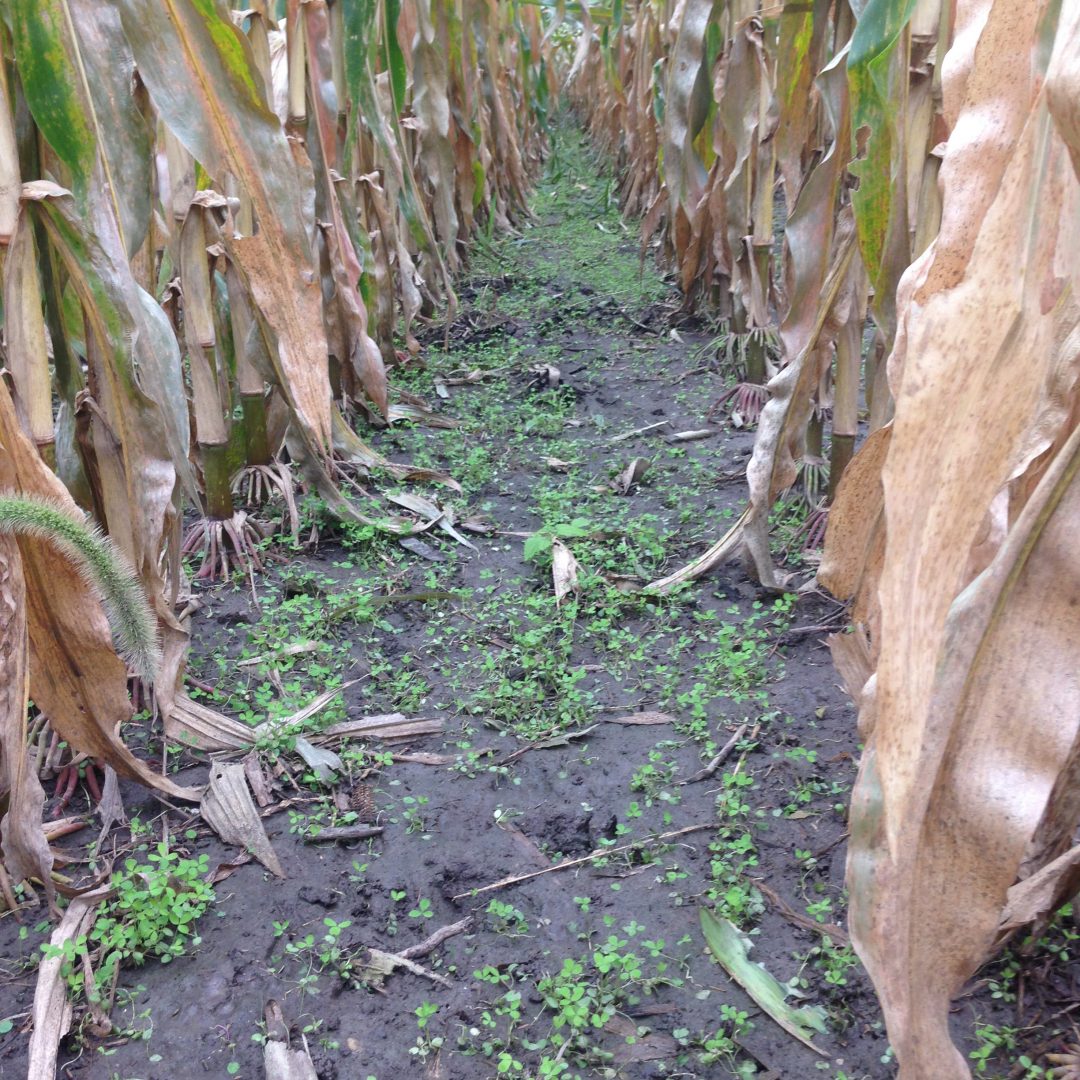 Interseeding cover crops into corn allows for producers in challenging climates to maximize the benefits of cover crops through early establishment for a longer growing window. Photo by GO SEED 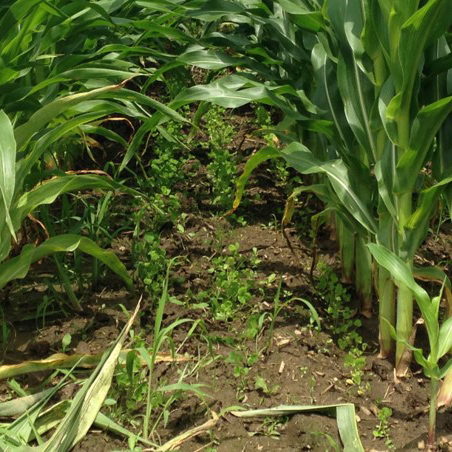