While visiting farms in the heart of the Corn Belt a few weeks ago, I had the privilege of paying a call to the 7,000 acre corn, soybean and beef farm managed by Rick Clark in Williamsport, Indiana. Given the wet spring his area has had, I couldn’t help but notice the stark difference between his fields that we walked without the need for boots and his neighbors fields that were completely saturated. According to him, his field conditions are primarily down to the way the farm is managed.

Fifteen years ago, the farm transitioned to no-till soybeans. Five years later, it also transitioned corn into no-till and started planting cereal rye cover crops. However, it wasn’t until Mother Nature “shoved” the farm into what Rick calls “farming green” eight years ago that he started to maximize cover crop potential. In a nutshell, farming green is planting a cash crop into a living and growing cover crop which is then terminated anywhere from 3-30 days after drilling the cash crop. A consistently wet planting season prevented the farm from terminating the cereal rye cover crop at the usual time that year, forcing them to plant into it. But rather than being the train wreck they all anticipated; it fundamentally changed the management of the farm.

Looking at the data

Rick is a firm believer in the power of data, recording as much as possible to make future management decisions. To fully understand what the cereal rye crop was contributing to the farming green system, a 2-by-2-foot sample was mowed down to the ground and overnighted to a lab for assessment on 12”, 18” and 28” crop heights. Two months after termination, another sample was taken.

Looking at data in Figure 1, it became crystal clear to Rick that the longer he let his cover crop go, the more nutrients it sequestered. In his part of the world, getting cereal rye from 12” to 18” takes about four days in April – another reason to not be so quick to burn the cover crop to the ground at the end of March.

Tapping into the cover crop’s potential also proved to have significant financial gain by reducing inputs. From 2011-2018, the farm went from using 33,011 gallons of farm diesel to only 15,151 gallons (see Figure 2). With a good handle on the soil profile from annual testing, the farm was also able to eliminate the use of potash and lime.

While the figures show a drop from 220 units of nitrogen per acre to 160, Rick says this is quoted conservatively. To avoid a cover crop monoculture, the farm has transitioned away from cereal rye and started to use a cocktail mix of FIXatioN Balansa Clover, forage oats, winter peas, sorghum-sudangrass, tillage radish. FIXatioN Balansa Clover is an annual that can survive in temperatures as low as -14 degrees Fahrenheit and can produce more than 200 pounds of nitrogen per acre. In the fields with legume winter survival, Rick is only having to use 60 units of nitrogen per acre. The farm also prefers it to other clover species for its hollow stem, which makes it easy to terminate with a roller crimper.

Aside from the serious input reductions the farm has achieved, the other impressive part about the operation has been the consistent increase of yield for corn and soybean crops. Since 2011, corn has increased an average of 3.9 bushels per acre each year, and soybeans have increased 1.3 bushels per acre.

A focus on soil health

So, how was this all achieved? A focus on soil health. Rather than chasing after yield and throwing everything and the kitchen sink at the cash crop, Rick made soil health the top priority. Then the rest followed.

While the farm will always be evolving, Rick offers a few pieces of advice to producers looking to maximise cover crop potential to reduce input costs: start slow with trial plots, data record everything and most importantly – don’t make it complicated. 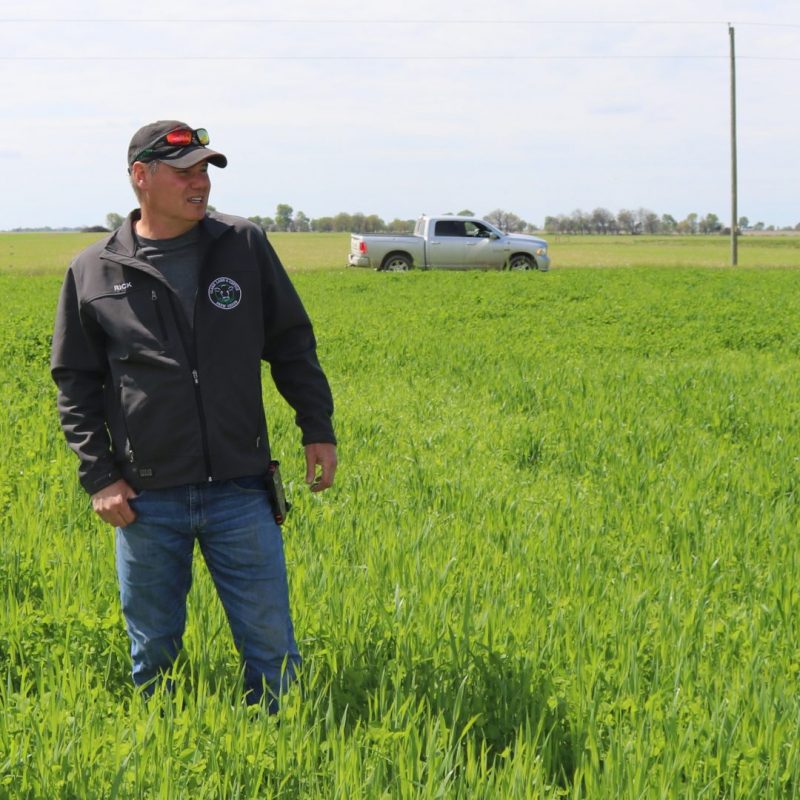 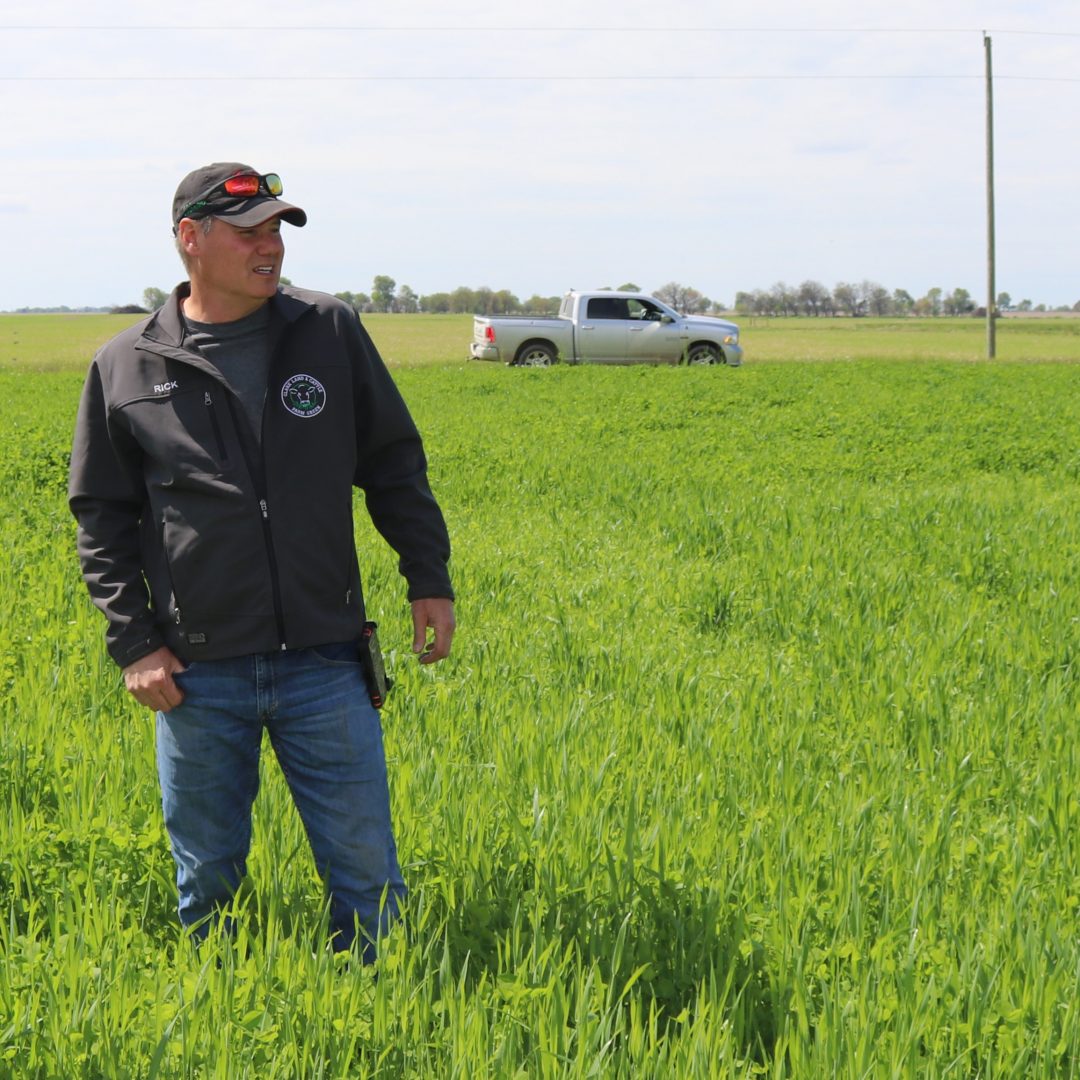 Rick Clark of Clark Land & Cattle, Williamsport, Indiana, stands in a field with cover crop covers that will be planted with corn or soybeans. Since farming green, Rick has made significant reductions to inputs while seeing an uplift in cash crop yields. 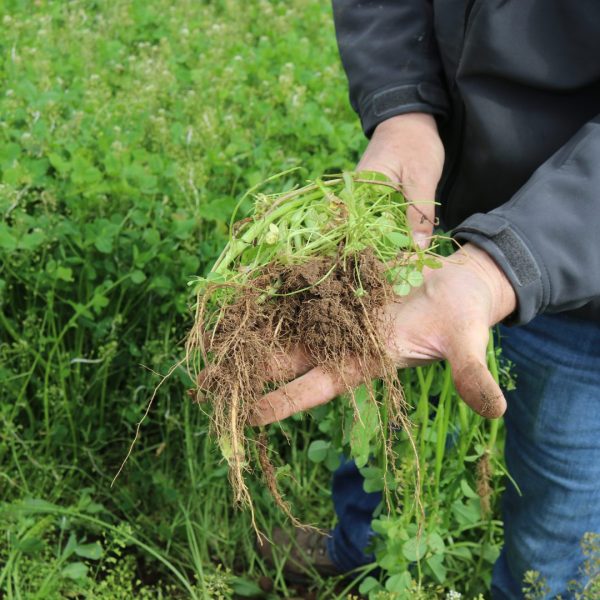 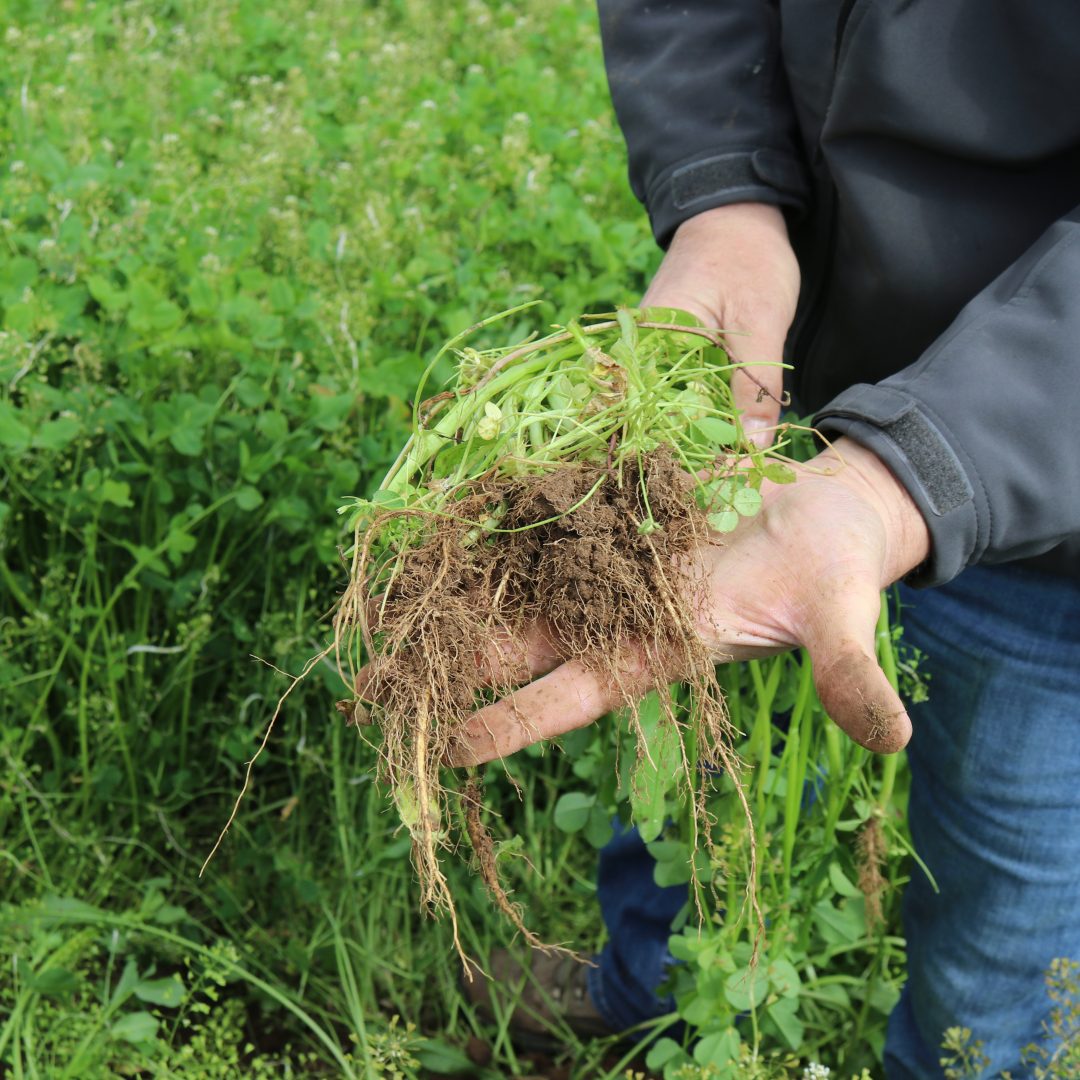 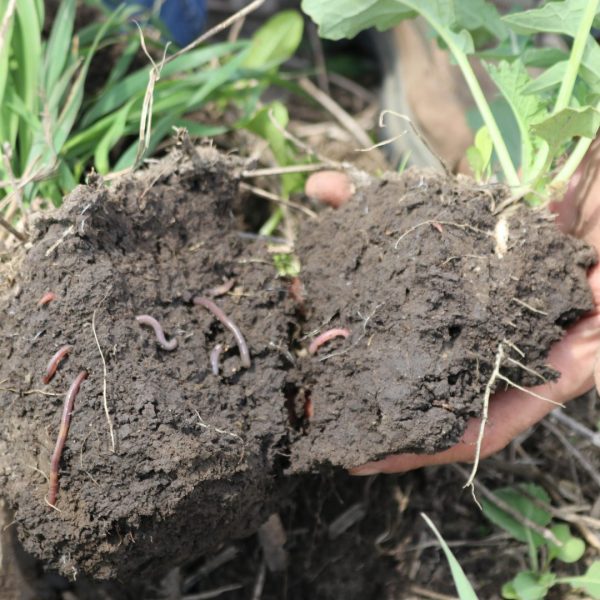 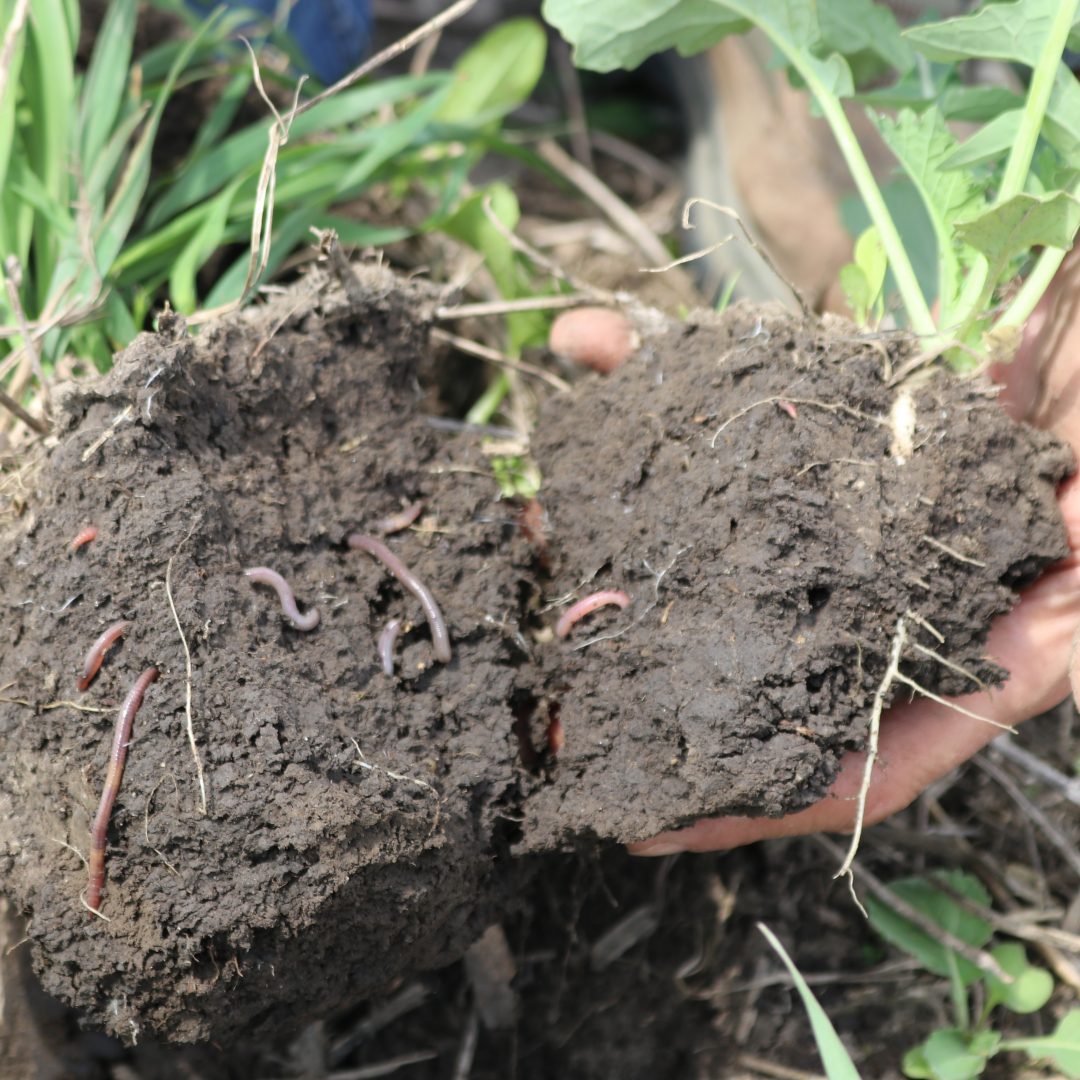 Soil health is the first priority of Clark Land & Cattle. After a very wet spring, their fields could be walked through without boots while the neighboring fields were saturated with water. 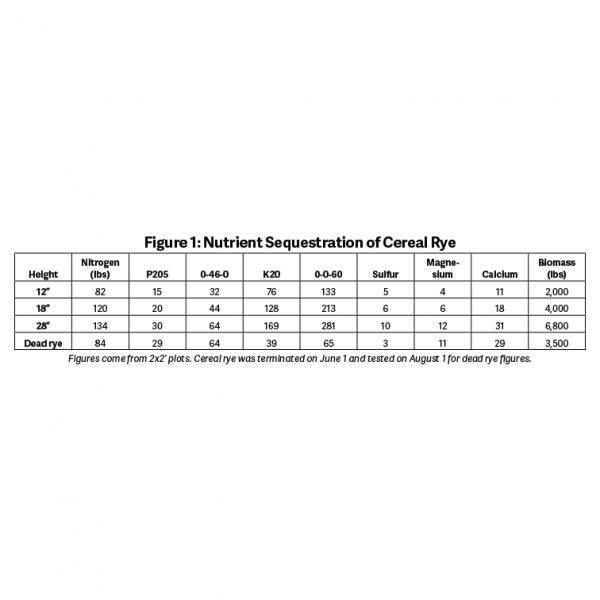 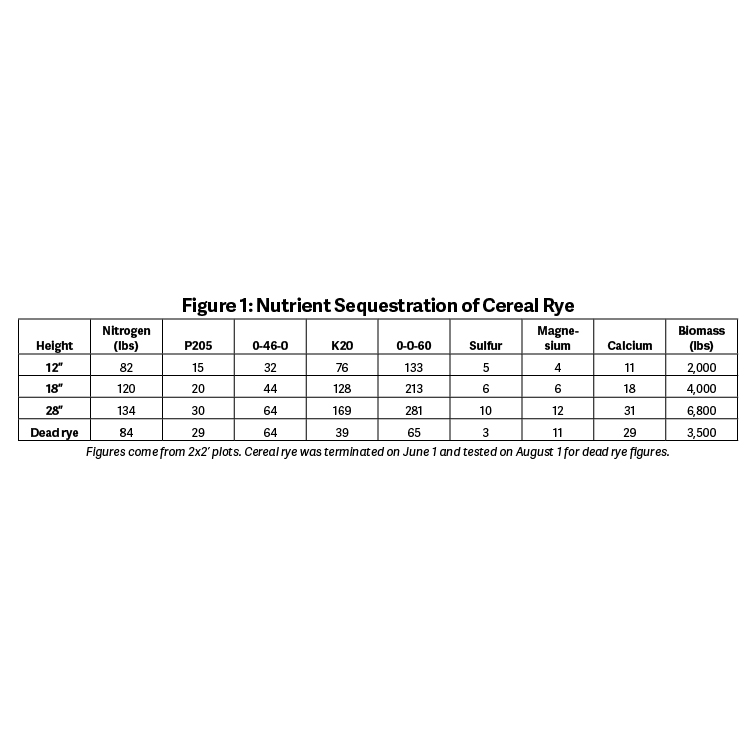 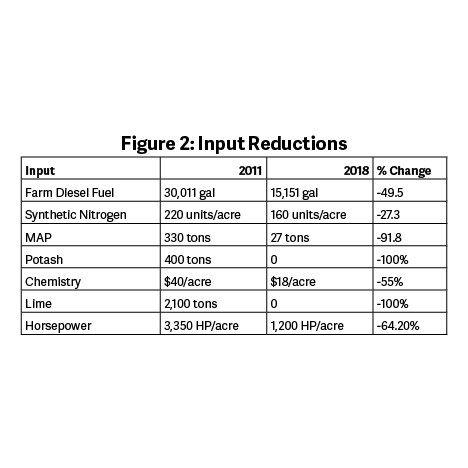