It’s been a tough year for many producers throughout the Midwest with record acreage going into prevent plant. Dave Chance of Chance Farms in Lebanon, Ind., was no exception this spring, drilling 600 acres of his 2,200 acre corn and soybean farm with cover crops. Unable to get any corn in the ground, Dave managed to plant 1,450 acres of soybeans.

During a cover crop tour in the Corn Belt, I had the opportunity to pick Dave’s brain about his approach to making the most of his prevent plant acres. A 14-year veteran to cover cropping, Dave has many words of wisdom from lessons learned for his fellow producers venturing into cover crops for the first time:

Rather than looking at your prevent plant acres as a one and done for a check, look at it as “a golden opportunity” to try something you wouldn’t have otherwise done. If you want your cover crop to be a success, then adopt a positive mindset and focus on the benefits they bring to the table. For example, focus on how the uplift in soil health from cover crops will positively impact the long-term production of the farm, or how legumes in the field now are potentially going to reduce nitrogen input costs next spring. Dave is adamant that this simple shift in thinking will be the difference between failure and success for people venturing into cover crops extensively for the first time this year.

In a typical year, Chance Farms follows a corn and soybean rotation, with 10 percent of the acreage going into wheat, which is followed by an overwinter cover crop mixture. Dave calls this the “rehab” year, with each part of the farm going through it every seven years. This rotation was developed by accident in 2005. In an effort to get tile ditching work completed during the summer, one of the 178-acre fields was split in half and planted with wheat on one side and kept in the corn-soybean rotation on the other side. The plan was to tile ditch the wheat side and then urea top dress it in the spring. Dave and his dad got to talking about how his great grandpa used to add clover in his urea top dressing to keep weeds down and add nitrogen back in the soil. As an experiment, he decided to broadcast Canadian giant mammoth clover into the wheat. While doing tile work in the field after the clover had been established, the changes in the trial plot’s ecosystem became very apparent. The soil had a rich, healthy smell, and clover root structures were reaching 10-12 inches deep, covered in nodules. Examining the healthy stand of wheat and clover, Dave found the butterfly and bee population to be greater in the field. However, the real light bulb moment came when the wheat and clover trial plot was transitioned back into corn and yielded a 35-bushel advantage over the half of the field left in the corn-soybean rotation.

For the next three years, Dave experimented with different species of cover crops to find what was most suitable for their farm, and aggressively integrated it into the system in 2010. The cover crop “rehab” year serves many purposes to the long-term success of the cash crop system. Improvements to soil health and structure have contributed to yield increases in the following corn and soybean crops. And while it varies on the cover crop mix and weather conditions, some years have resulted in the reduction of synthetic nitrogen inputs.

While most prevent plant acres will have already been established, Dave is an advocate for utilizing cover crop mixtures rather than planting a monoculture. This is the best way to benefit multiple areas of the farm system, whether it is adding organic matter back into the soil, fixing nitrogen, suppressing weeds, or improving water sequestration. His foundation ingredients to his cover crop recipes always include a legume, brassica, grass and broad leaf specie to “turn the soil on” and to choke out weeds.

With the farm’s five mixtures ranging from three to 16 species each, and more than 20 different species being used throughout the farm, Dave has placed a great deal of emphasis on selecting for variety traits. According to him, variety selection has been the difference between successful years and flops on multiple occasions. Along with being able to rely on consistency of performance, he can also take advantage of specific traits bred into the varieties. Currently two of his favorite clover varieties to include in mixtures are cold tolerant FIXatioN Balansa Clover and Frosty Berseem Clover from Grassland Oregon. FIXatioN Balansa Clover can contribute up to 200 pounds of nitrogen per acre and yield 5 tons of dry matter in a single growing season. It’s deep tap root system also helps with compaction, soil drainage and water infiltration. Frosty Berseem Clover has specifically been bred for fast establishment, late maturity and the ability to survive in temperatures as low as 20 degrees Fahrenheit.

Dave strongly urges fellow producers to experiment with different mixtures for a couple years to see what works best for their unique challenges before using them aggressively. In one of his recent trials that was incorporated extensively into the farm as prevent plant acreage, a mix of oats, buckwheat and radish was broadcasted and then rolled to incorporate seed into the top 0.5 inches of soil. Then, with a 15 inch row planter, winter peas were drilled at a rate of 27 pounds per acre. The broadcasted species will act as a protective wall this winter for the peas. This spring, Dave plans to go back in and plant corn between the 15 inch rows to fully take advantage of the nitrogen contribution.

Regardless of varying dates tied to prevent plant payments, Dave’s past success with cover crops has secured their existence on his budget sheet without any added government support. If you are too late to the game for prevent plant payments but still have land that needs to be planted, it is not too late in the season to establish a cover crop. Thanks to improved plant breeding, there are multiple fast establishing options available that have time to get going before the first autumn frost.

Dave’s final piece of advice is to look at your cover crop venture as a marathon – not a sprint. Simply putting a cover crop in the ground to collect a government check and then turn around and go back to the way you’ve always farmed won’t yield the full benefits of cover crops. It takes years of consistent management to rebuild soil health and capture the full potential of cover crops. However, by experimenting with different species and methods to figure out what is best for your system and taking advantage of the lessons learned from producers like Dave, the long-term rewards from cover crops will be worth it.

If you have any questions about which cover crop options will work best for your geography and unique challenges, give Grassland Oregon a call at 503-566 9900. 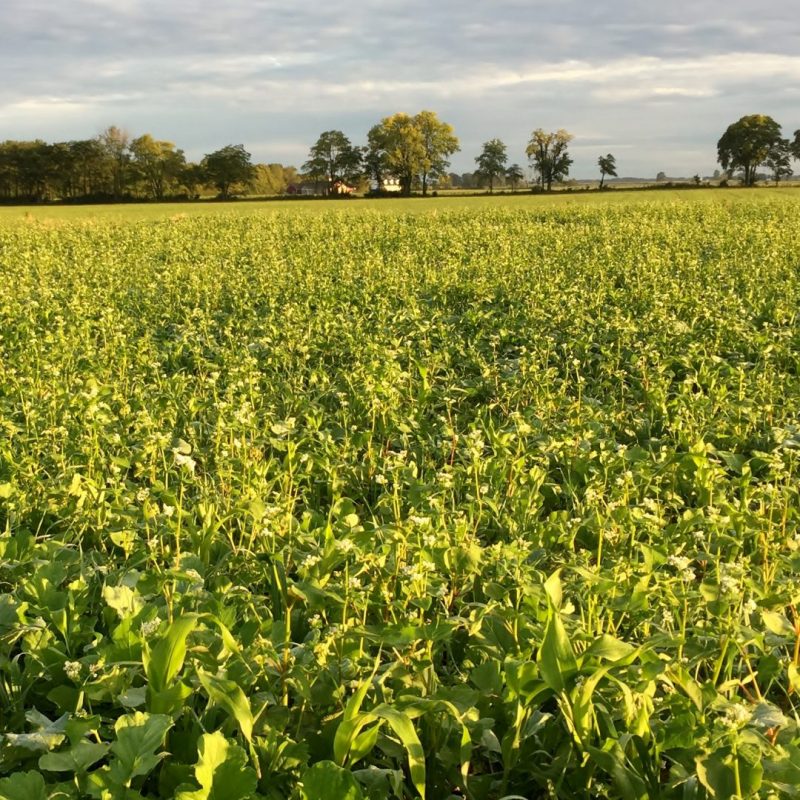 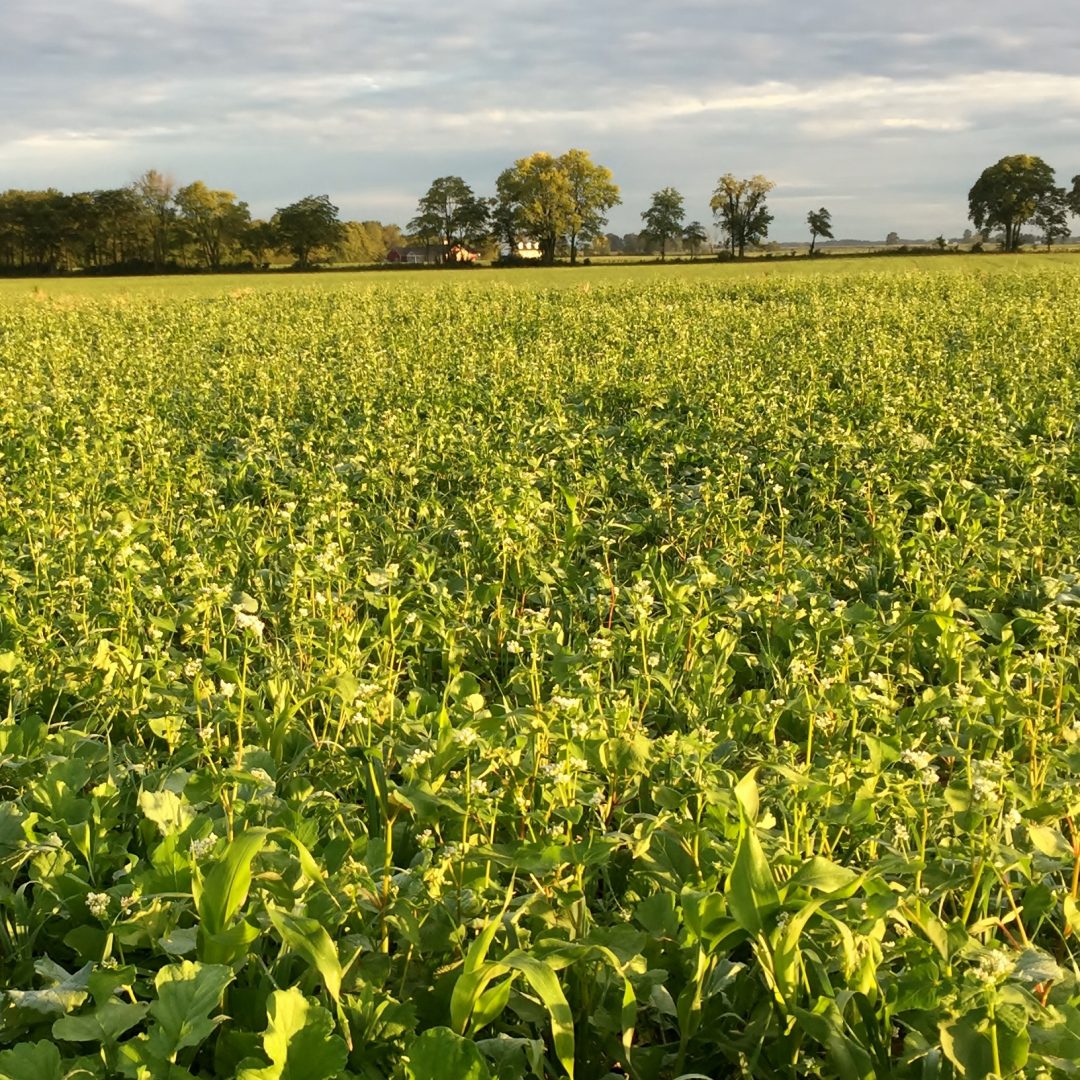 Dave Chance advocates the use of cover crop mixtures to take advantage of the benefits from multiple species. This mixture consists of 16 species, which have mainly been selected for variety traits to ensure consistency of performance. 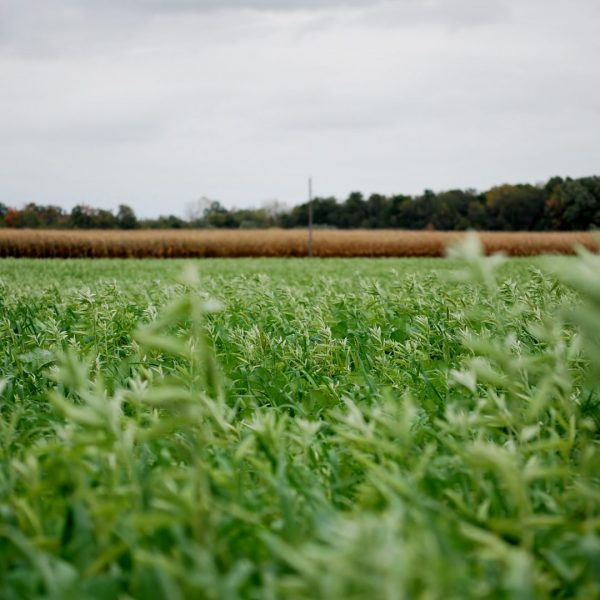 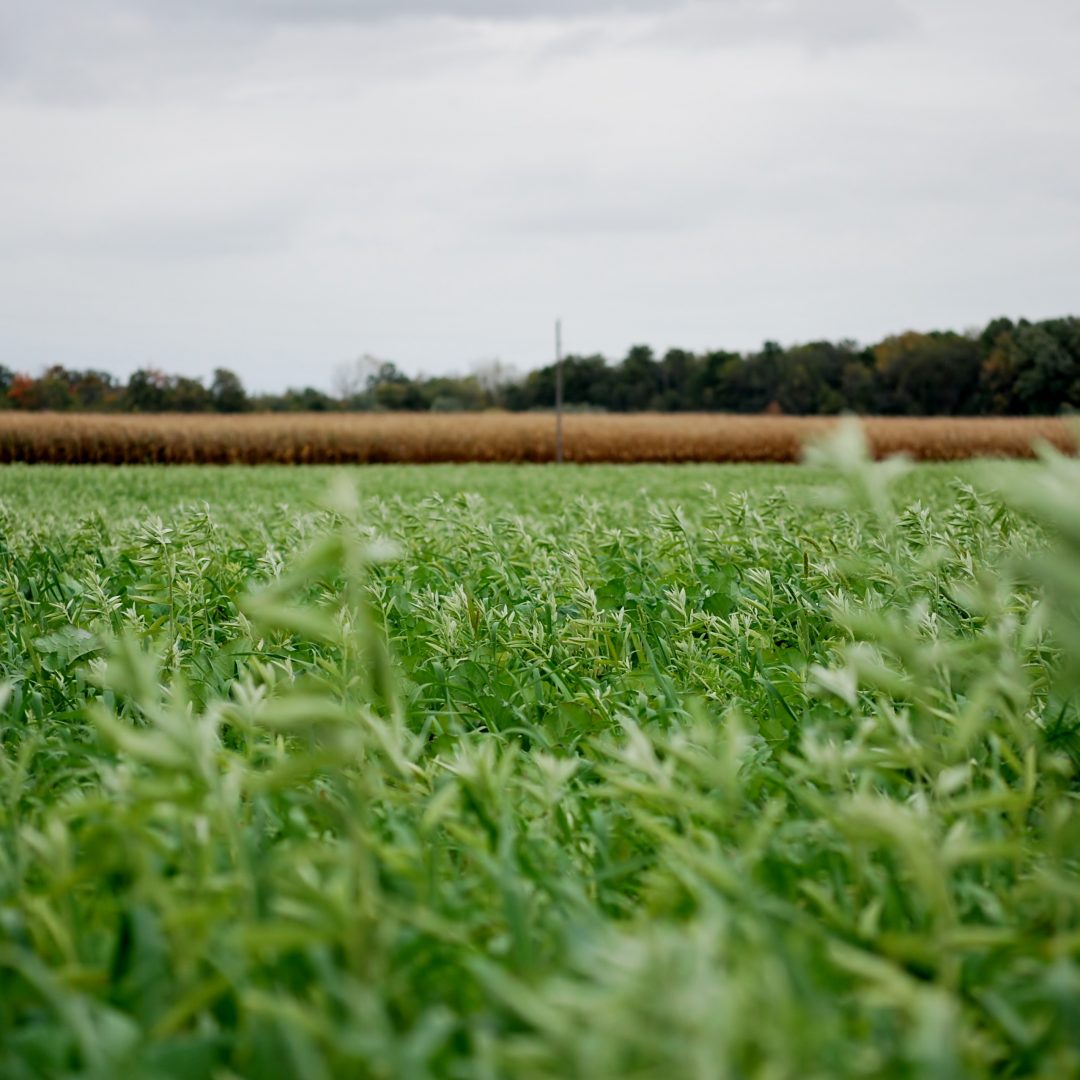 Selecting for variety traits has been the difference between cover crop success and failure on many occasions for Chance Farms. Two of his favorite legumes to include in mixtures are FIXatioN Balansa Clover and Frosty Berseem Clover from Grassland Oregon. Both have been bred to fix notable amounts of nitrogen and to produce significant biomass while surviving in sub degree temperatures. 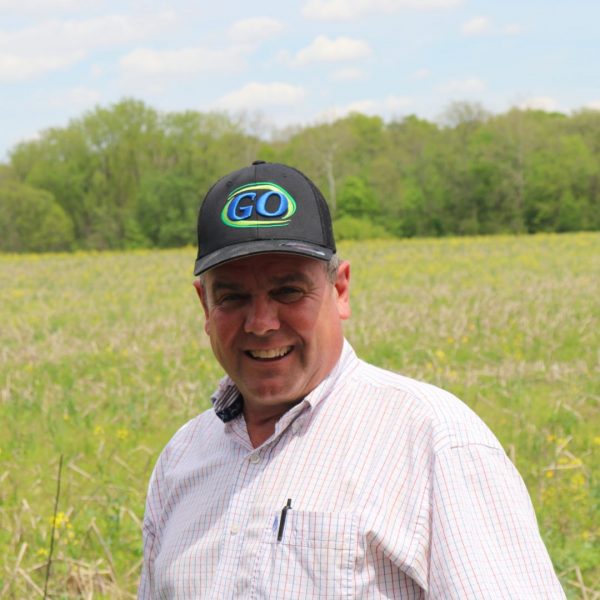 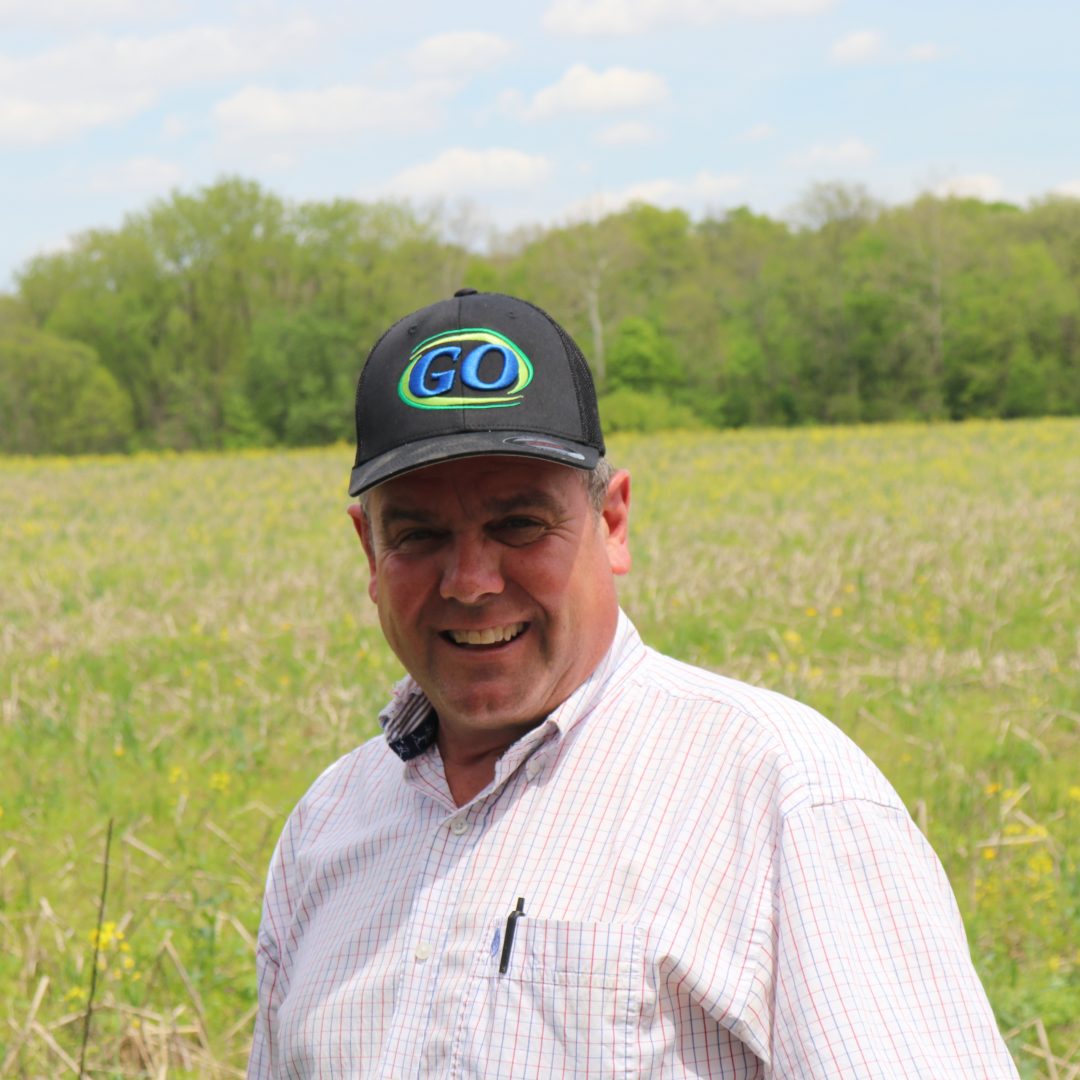 Dave Chance of Chance Farms, Lebanon, Ind., started integrating cover crops into his corn and soybean rotation in 2005. This year, 600 acres of the 2,200 acre farm went into prevent plant.